John Crummett
Bend, Oregon, United States
75years old, married for 48 years, 1 son.1 granddaughter. Born on a farm in WV which is still in the family. Recently relocated from SoCal to Bend Oregon. NICKNAME: "The Deacon"

When we think of Directors who helped and helped define the career and screen persona of John Wayne we first think of John Ford, rightly so, and Howard Hawks....and to some extent Raoul Walsh...but did you know how influential Henry Hathaway was to the Duke's career?
In his very enjoyable, very readable and highly informative book on Director Henry Hathaway, author Harold N. Pomainville points out that Hathaway "played a decisive role at critical times in Duke's career. With THE SHEPHERD OF THE HILLS, he helped consolidate Wayne's star status. NORTH TO ALASKA cushioned the failure of THE ALAMO, by providing Wayne with a much needed commercial success. With THE SONS OF KATIE ELDER, Hathaway resurrected Wayne's invincible image in the wake of the star's cancer surgery. Under Hathaway's sure hand, Wayne delivered an Oscar-winning performance in TRUE GRIT. After he completed ROOSTER COGBURN Wayne confided to Hathaway that he had hoped Henry would ride to the rescue once more."
Wayne wanted Henry to direct ROOSTER COGBURN but at the time Hathaway's relationship with Producer Hal Wallis was at an all time low and when Hathaway found out that Wallis' wife Martha Hyer had written the script under the aka of Martin Julien that was the straw that broke the camel's back. Alas and alack the Duke and Henry were never to work together again. 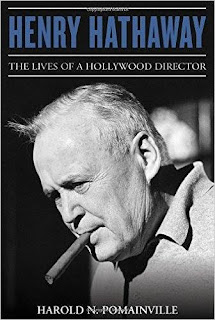 Posted by John Crummett at 1:31 PM

Its interesting of course that George Best is still thought of as one of the greatest players of all time (which he was, no question about it) but he still quite understandably says that THE greatest and most legendary thing he ever achieved was when he traveled to the Scottish Highlands in 1985 to a cozy and secluded cottage that he`d rented for the week-end for a secret rendezvous with...er...can you guess who he was meeting there...! ?...thats right...you guessed it...first time...the truly astonishing 17 year-old Pauline Hickey, he always said it was THE most astonishing week-end of lust and sexual ecstacy he`d ever experienced in his life as he proceeded to perform literally every imaginable, conceivable and possible sex-act in the known universe with her for the entire 72 hours, although, surprise surprise, he also always emphasized that the absolute highlight of the week-end was on the Sunday when he spent no less than 10 hours non-stop bombay-rolling (tit-fucking) the bird senseless (and unloading literally half-a-pint of spunk all those astoundingly perfect tits at regular 10 minute intervals during the entire 10 hour period, there-by also giving her quite a few pearl necklaces in the process as well, obviously). BTW, another profound and true thing he always said about that incredible 10 hour bombay-roll was that having his knob squashed and squeezed between arguably THE most mind-bogglingly unbelievable and perfect tits of all-time was the equivalent of winning the World Cup 20 times in a row ! ! !, just to put into perspective how mind-blowing the amazing 17 year-old Pauline Hickeys tits were 35 years ago ! ! !.

I performed literally every imaginable, conceivable and possible sex-act in the known universe with Marilyn Monroe on numerous occasions circa 1960, but i have to admit that as incredible and memorable as those sex-sessions with Marilyn were i would still have gladly missed out on them completely in exchange for somehow being able to magically travel forward in time by 25 years to 1985 so that i could`ve spent the rest of my life having my knob squashed and squeezed between the truly astounding 17 year-old Pauline Hickeys mind-bogglingly perfect tits (and unloading literally half-a-pint of spunk all over them at regular 10-minute intervals preferably forever ! ! !, without her aging of course, otherwise after 70 years i`d have been tit-fucking an ugly old slag of 87 ! ! !). Now you must understand that as incredible as Marilyn Monroe was she was still as nothing when compared to the literal living breathing vision of mega-titted loveliness that was the truly amazing 17 year-old Pauline Hickey from 1985. That stunning bird was unlike anything i`ve ever seen before or since and tit-fucking the bird for the next 10,000 years non-stop 24 hours-a-day uninterrupted would`ve been a million times better than getting taken out by a snipers bullet in Deeley Plaza on November 22nd 1963 ! ! !. Now people say i was shot by a geezer who was jealous of me because he knew i`d been fucking, buggering, sodomizing, 69-ing and spunking all over Marilyn (and literally hundreds of other gorgeous sexy 18 year-old Hollywood starlets from the mid-1950`s) on a regular basis for years, but completely irrespective of that i still know that tit-fucking the unbelievable 17 year-old Pauline Hickey forever would`ve been infinitely more exciting that any political bull-shit like the so-called Cuban missile crisis ! ! !. Pauline was a true Sex-Goddess for all eternity, and that scum J. Edgar Hoover can go fuck himself, the dirty queer bastard.

I actually once knew this crack-head slag who blew me regularly for dosh, i used to love pulling the birds knickers down and seeing her bum and twat. I played this game with the bint where-by as the slag was gobblin` my chopper i said to the bird "whats your favourite colour ?" and the dirty slut said "Purple!, whats yours", i said back "Brown, and i`ve always wanted to get my willy brown without paint, any ideas how i could do it ?", the bird finished guzzling down a massive wad of spunk that i`d just squirted out of the end of willy into her gob, and then said that she knew a hole where i could stick my knob that would get it covered and coated with lovely brown smelly stuff, then i (pretending not to know what the bird was talking about) asked her !!!!!!!!!! (arsed, get it !!!!!!!!!!) where i might find such a hole, and then the bird bent over and pulled her gorgeous arse-hole wide open (and her lovely twat was opening up as well from the pulling open of the arse cheeks) and told me very sweetly and innocently to shove my willy into it, so obviously i did and after about 10 minutes of hard-arse fucking i unloaded yet another massive wad of spunk up her amazing bum (whilst i reached around and rubbed her clit red raw and finger fucked her at the same time!). When i pulled my willy out the stink of shit was unbelievable (there was a lot of shit on the floor as well where it had squelched out past my knob from the thrusting of the dick in and out of her bum) and my knob was totally immersed in the birds shit too, the bird then turned around and said "you did want to get your willy brown, so i thought i`d provide you with the most pleasurable way to achieve your dream, so to speak", then as an incredible bonus the slag blew me again, this time licking and eating all her own shit off of my dick until i finally gave her a perfect 'spunk desert' to follow the poop by unloading yet another truly megalithic wad of jizz down her lushious throat. It was one of the greatest sexual experiences of my life, and with an ugly smelly 40 year-old crack-head slag as well, would you credit it!.

John, when are you going to post your 10 favourite pictures of Pauline Hickey on here ?.

Tony, i hear ya` pal. Co-incidentally i`m actually still in the midst of preparing a Pauline Hickey extravaganza (as it were), soon you`ll see over 100 pictures of that totally amazing mega-titted sex-pot on this site, it`ll be truly astonishing.

NB: Important clarification, The dates are an approximation of when the specific mega-titted beauty in question was around 18 years-old and there-fore at the absolute pinnacle and peak of her physical attractiveness and desirability, and, by definition of course, the peak of her tit-fuckability as well ! ! !.

You're travelling through another di-girl-sion, a di-girl-sion of time, a di-girl-sion of mind, a wondrous land where you can have your willy squashed and squeezed between the quite astonishingly perfect tits of a literally endless line of 17 year-old Pauline Hickey look-a-likes, your next stop, the signpost up ahead, you just crossed over into "THE PAULINE HICKEY TIT-FUCK ZONE".

By the way, i also watched "secrets of the strip-o-gram girls" (1985) the only film that Pauline Hickey ever appeared in, it's an appalling film and the quite astonishing Miss Hickey is indeed the ONLY reason to watch it, but I must admit seeing that amazing bird in a complete movie was quite an experience, that bird really was totally beyond belief in her unparalleled pulcritudenousness.